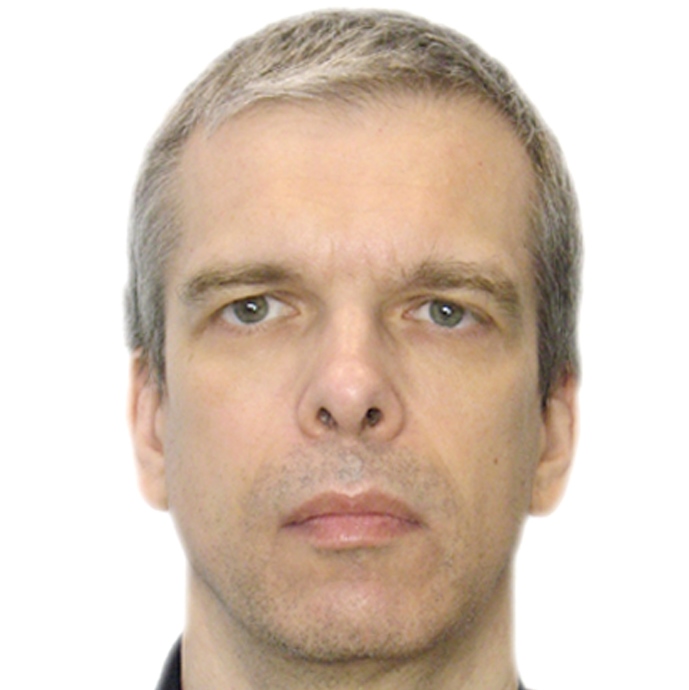 The Laboratory of Complex Systems Modeling and Control kindly invites you to our climate change seminar, which is held online  on Thursdays at 16:20-17:40, Moscow time.

By obtaining the analytic signal of daily sunspot numbers since 1818 we construct a new solar cycle phase clock that maps each of the last 18 solar cycles onto a single normalized epoch. This clock orders solar coronal activity and can be used to order observations that exist on multiple solar cycles. The aa index  tracks geomagnetic storms at the Earth's surface over the last 14 Schwabe cycles, and 'space age' observations are available over several Schwabe cycles: e.g. F10.7 solar radio flux, galactic cosmic ray flux and the GOES flare catalog. We will construct 'clocks' for the (on average) 11 year Schwabe and 22 year Hale cycles to discern systematic Schwabe and Hale cycle variations in these quantities. Analysis of the aa index is desirable given its extent in time, however it is a discretized quantity rather than a well sampled timeseries. New methods to quantify the occurrence rates of extreme events in aa (amplitude information) and in its 27 day recurrence (phase information) are applied in the context of these solar cycle clocks.

Sunspots – observable patches on the Sun where intense magnetic fields loop up through the surface – play significant role in research of solar activity. One of the difficulties faced by researcher is restricted visibility of the Sun – one can see only half of the solar surface from the Earth.  Especially strong solar activity is connected with large sunspot groups that are supposed to be visible during more than one solar rotation. Hence continuous observation of such groups is impossible and the problem of long-lived (recurrent) sunspot groups identification arises. Today exist applications of data analysis and machine learning methods to this problem. The most prolonged database of sunspot group areas is the Royal Greenwich Observatory catalogue began in 1874 (it contains also descriptions of some groups supposed to be recurrent). We will show one of the identification algorithms, results of its application and comparison with other approaches.

According to the classic models (Parker, ApJ, 1958; Weber & Davis, ApJ, 1967) the interplanetary magnetic field (IMF) has a dipole structure. The regions with different polarity of IMF are separated by heliospheric current sheet which is a tangential discontinuity. The solar wind and IMF are isotropic in both hemispheres, IMF is twisted into an Archimedean spiral due to violation of corotation of the plasma and the Sun. Over the past half-century a lot of observational data has been obtained indicating that the structure of the inner heliosphere is much more complex than it is in old models. Despite this, there are still any deviations from the dipole and/or isotropic description are perceived as nontrivial, the self-consistent structure of the current sheet is not considered, the problem of the type of discontinuity in the current sheet is not solved completely.
You will see in this report the heliosphere with multiple IMF, MHD-structure of the heliospheric current sheet, nonisotropic solar wind and cone-shaped polar current sheets are recently discovered in Ulysses data.

We examine the problem of assigning plots of land to prospective buyers who prefer living next to their friends. In this setting, each agent's utility depends on the plot she receives and the identities of the agents who receive the adjacent plots. We are interested in mechanisms without money that guarantee truthful reporting of both land values and friendships, as well as Pareto optimality and computational efficiency. We explore several modifications of the Random Serial Dictatorship (RSD) mechanism, and identify one that performs well according to these criteria, We also study the expected social welfare of the assignments produced by our mechanisms when agents' values for the land plots are binary; it turns out that we can achieve good approximations to the optimal social welfare, but only if the agents value the friendships highly. Based on joint work with Neel Patel, Alan Tsang and Yair Zick.

21.04.2020. Igor Rouzine "An evolution-based measurement of the fitness landscape from genetic sequences"

Fitness landscape is the most important input parameter required to predict the trajectory of pathogen's evolution. Here we present two methods, which in combination allow to measure fitness landscape from genetic data.  Also, an intriguing fact long defying explanation is the observation of a universal exponential distribution of beneficial mutations in fitness effect for different microorganisms. Here we use a general and straightforward analytic model to demonstrate that, regardless of the inherent distribution of mutation fitness effect across genomic sites, an observed exponential distribution of fitness effects emerges naturally, as a consequence of the evolutionary process. Our results demonstrate the difference between the distribution of fitness effects experimentally observed for naturally occurring mutations and the inherent distribution obtained in directed-mutagenesis experiments. The technique will enable researchers to measure fitness effects of mutations across the genome from a single DNA sample, which is important for predicting the evolution of a population.

Linkage effects in a multi-locus population strongly influence its evolution. Recent models based on the traveling wave approach enable us to predict the speed of evolution and the statistics of phylogeny. However, predicting the evolution of specific sites and pairs of sites in the multi-locus context remains a mathematical challenge. In particular, the effect of epistasis, the interaction of gene regions contributing to phenotype, is difficult both to predict theoretically and detect experimentally in sequence data. A large number of false interactions arising from linkage and indirect interactions which mask true interactions. Here we develop a method to clean false-positive interactions. We start by demonstrating that averaging of the two-way haplotype frequencies over a hundred of independent populations is not enough to clear false interactions. Then, to address this problem, we develop analytically and use a triple-way haplotype test, which isolates true interactions. Next, the fidelity of the test is confirmed on simulated genetic sequences, where the epistatic network known in advance. Finally, we apply the test to a large database on influenza A H1N1 virus sequences of neurominidase from various geographic locations to predict the epistatic network responsible for the transition from the pre-pandemic virus to the pandemic strain. We predict a primary mutation and 15-22 secondary compensatory mutations of variable strength, as many as typically observed for drug resistance and immune escape mutations in HIV. These results present a simple and reliable method to measure epistatic interaction from sequence data.

I suggest a semi/nonparametric, computationally attractive procedure to evaluate counterfactual welfare in a general class of discrete choice models, for which a consistent estimator of in-sample conditional choice probabilities and mean utilities is available. This class includes semiparametric dynamic discrete choice models under conditional independence as in Buchholz et al. (2016) and semiparametric random utility models with additively separable heterogeneity as in Allen and Rehbeck (2019). The estimating procedure does not require any prior knowledge of the distribution of the utility shock (as in multinomial logit) or the distribution of the random coefficients (as in mixed logit); instead, the only information used in estimation is convexity of welfare as a function of mean utilities. The estimators are based on the convex dual representation of the welfare function, are nonparametrically consistent (as long as the demand can be identified) and enjoy an array of properties implied by rational behavior of the consumer. To the best of my knowledge, this is the first consistent procedure for counterfactual evaluation in the aforementioned class of discrete choice models.

Have you always wanted to make mobile apps, but don't know how to start?
At the upcoming master class, anyone can create his first mobile app and launch it on the smartphone!

In 2015, the solution of he simplest version of poker was published in Science (Bowling et al., 2015). Even in the simplest version of the game it is extremely difficult to find an analytical solution. The authors use the concept of Epsilon-equilibrium to find an approximate, in some sense, equilibrium. This concept is convenient because it allows to use computing methods to find an approximate equilibrium. In the talk we will introduce the essential definitions and look at examples of how Epsilon-equilibrium helps to solve difficult game problems.

We consider the systems of coupled oscillators where the cases of phase and frequency synchronization are of particular interest. In contrast to simple linear models of connected pendulums (such as the Kuramoto model), in the case of dissipatively connected Van der Pol oscillators, phase transitions (bifurcations) of the system can be detected with respect to changes in the coupling coefficient. In the talk several similar features will be described for cases of symmetric and asymmetric coupling.

In experimental high-energy physicis the fundamental properties of elementary particles are studied. The data obtained from the experiment detectors go through several processing steps and are stored for further physical analysis. During the talk solutions to several problems of data processing and storage using machine learning methods are presented.

In particular, the problems of recognition of charged particle tracks in the tube spectrometer of the SHiP experiment at CERN and optimization of parameters of its geometry are considered. The problem of global particle identification for the LHCb experiment at CERN is discussed. In addition, algorithms for diagnosing failures in storage systems are mentioned.

25/09/2019 Super-diffusion and other problems of statistical physics

Some statements of educational and scientific problems of statistical physics of disordered systems, random walks, some aspects of the graph theory and extreme statistics were discussed.

The properties of the composite synthesis algorithm are investigated and it is proved that it also allows preserving the equivalence of the original state machine and the synthesized Petri net.

The presence of a sufficiently large set of various indices of solar activity associated both with the magnetic field and with the external observable features (the number and area of ​​sunspot groups, etc.) leads to a natural desire to build an exhaustive analytical model. Attempts to use classical oscillators did not reveal the ability to qualitatively reflect the phenomena of phase and frequency synchronization between different indices, one way or another observed in the data; however, at the same time, the Kuramoto model of linear oscillators with non-linear coupling specifically investigates such situations. The described synchronization can be achieved by including the connection between oscillators physically realized by the solar meridional flux into the model, which is consistent with the helioseismology data. In the story, the reverse procedure will be discussed: restoring a certain understanding of the intensity of the connection between them using these oscillators; It will also discuss the quality assessments of this procedure and the features of recovery errors caused by the connection characteristics and model correctness.