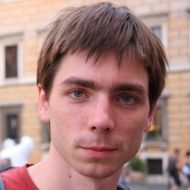 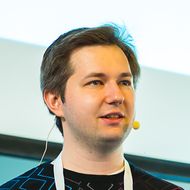 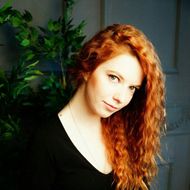 In this paper, we propose a novel application of Generative Adversarial Networks (GAN) to the synthesis of cells imaged by fluorescence microscopy. Compared to natural images, cells tend to have a simpler and more geometric global structure that facilitates image generation. However, the correlation between the spatial pattern of different fluorescent proteins reflects important biological functions, and synthesized images have to capture these relationships to be relevant for biological applications. We adapt GANs to the task at hand and propose new models with casual dependencies between image channels that can generate multi-channel images, which would be impossible to obtain experimentally. We evaluate our approach using two independent techniques and compare it against sensible baselines. Finally, we demonstrate that by interpolating across the latent space we can mimic the known changes in protein localization that occur through time during the cell cycle, allowing us to predict temporal evolution from static images.

Article
Correction to the leading term of asymptotics in the problem of counting the number of points moving on a metric tree
V.L. Chernyshev, Tolchennikov A. Russian Journal of Mathematical Physics. 2017. Vol. 24. No. 3. P. 290-298.

In the problem of determining the asymptotics for the number of points moving along a metric tree, a polynomial approximation that uses Barnes’ multiple Bernoulli polynomials is found. The connection between the second term of the asymptotic expansion and the graph structure is discussed.

A fundamental notion in Algorithmic Statisticsis that of a stochastic object, i.e., an object having a simple plausible explanation. Informally, a probability distribution is a plausible explanation for x if it looks likely that x was drawn at random with respect to that distribution. In this paper, we suggest three definitions of a plausible statistical hypothesis for Algorithmic Statistics with polynomial time bounds, which are called acceptability, plausibility and optimality. Roughly speaking, a probability distribution μ is called an acceptable explanation for x, if x possesses all properties decidable by short programs in a short time and shared by almost all objects (with respect to μ). Plausibility is a similar notion, however this time we require x to possess all properties T decidable even by long programs in a short time and shared by almost all objects. To compensate the increase in program length, we strengthen the notion of ‘almost all’—the longer the program recognizing the property is, the more objects must share the property. Finally, a probability distribution μ is poly called an optimal explanation for x if μ(x) is large (close to 2 − C (x) ). Almost all our results hold under some plausible complexity theoretic assumptions. Our main result states that for acceptability and plausibility there are infinitely many non-stochastic objects, i.e. objects that do not have simple plausible (acceptable) explanations. We explain why we need assumptions—our main result implies that P 6 = PSPACE. In the proof of that result, we use the notion of an elusive set, which is interesting in its own right. Using elusive sets, we show that the distinguishing complexity of a string x can be super-logarithmically less than the conditional com- plexity of x with condition r for almost all r (for polynomial time bounded programs). Such a gap was known before, however only in the case when both complexities are conditional, or both complexities are unconditional. It follows from the definition that plausibility implies acceptability and optimality. We show that there are objects that have simple acceptable but implausible and non-optimal explanations. We prove that for strings whose distinguishing complexity is close to Kolmogorov complexity (with polynomial time bounds) plausibility is equivalent to optimality for all simple distributions, which fact c