Common sense suggests that networks are not random mazes of purposeless connections, but that these connections are organized so that networks can perform their functions well.
One function common to many networks is targeted transport or navigation. Here, using game theory, we show that minimalistic networks designed to maximize the navigation efficiency at minimal cost share basic structural properties with real networks. These idealistic networks are Nash equilibria of a network construction game whose purpose is to find an optimal trade-off between the network cost and navigability. We show that these skeletons are present in the Internet, metabolic, English word, US airport, Hungarian road networks, and in a structural network of the human brain. The knowledge of these skeletons allows one to identify the minimal number of edges, by altering which one can efficiently improve or paralyze navigation in the network, and to show that the spatiostructural organization of the human brain is nearly as needed for optimal routing of information between different parts of the brain.


For the most part, inventing a new algorithm is equal parts deep insight, experience, luck, and creativity. In this talk, I will introduce a more systematic approach to inventive algorithmics — an approach which also provides a correctness argument. Correctness-by-construction (CbC) is an algorithm derivation technique in which the algorithm is co-developed with its correctness proof. Starting with a pre- and post-condition specification, ‘derivation steps’ are made, eventually arriving at the final algorithm. Critically, each step in the derivation is a correctness-preserving one, meaning that the composition of the derivation steps is the correctness proof. While CbC can be used for already-invented algorithms, it can be used for taxonomization and also for identifying openings for new algorithms. This will be demonstrated on string, tree and FCA algorithms. 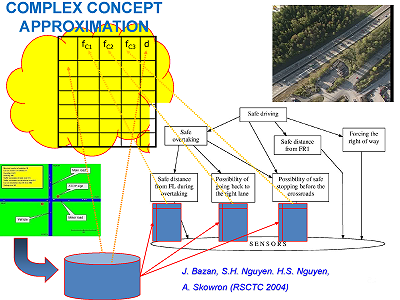 Rough set theory (RST) was introduced in the early 1980s by Z. Pawlak (1982) and has become a well researched tool for knowledge discovery. The basic assumption of RST is that information is presented and perceived up to a certain granularity: "The information about a decision is usually vague because of uncertainty and imprecision coming from many sources [. . . ] Vagueness may be caused by granularity of representation of the information. Granularity may introduce an ambiguity to explanation or prescription based on vague information" (Pawlak and Słowin ́ski, 1993). In contrast to other machine learning or statistical methods, the original rough set approach uses only the information presented by the data itself and does not rely on outside distributional or other parameters. RST relies only on the principle of indifference and the nominal scale assumption. It has been applied in many fields, most recently in the investigation of complex adaptive systems, interactive granular computing, and big data analysis (Skowron et al., 2016). In my talk I will present the basic concepts of RST as well as non–parametric methods for feature reduction, data filtering, significance testing and model selection.

In this talk I will give an overview of the computational steps in the analysis of a single cell-based large-scale microscopy experiments. First, I will present a novel microscopic image correction method designed to eliminate vignetting and uneven background effects which, left uncorrected, corrupt intensity-based measurements. New single-cell image segmentation methods will be presented using energy minimization methods. I will discuss the Advanced Cell Classifier (ACC) (www.cellclassifier.org), a machine learning software tool capable of identifying cellular phenotypes based on features extracted from the image. It provides an interface for a user to efficiently train machine learning methods to predict various phenotypes. For cases where discrete cell-based decisions are not suitable, we propose a method to use multi-parametric regression to analyze continuous biological phenomena. Finally, to improve the learning speed and accuracy, we recently developed an active learning scheme which selects the most informative cell samples.


In this talk we will advocate the use of weak systems of modal logic called strictly positive. These can be seen as fragments of polymodal logic consisting of implications of the form A -> B, where A and B are formulas built-up from T (truth) and the variables using just & and the diamond modalities. The interest towards such fragments independently emerged around 2010 in two different areas: in description logic and in the area of proof-theoretic applications of modal logic. From the point of view of description logic, strictly positive fragments correspond to the OWL 2 EL profile of the OWL web ontology language, for which various properties of ontologies can be decided in polynomial time. In the area of proof-theortic applications, these fragments emerged under the name reflection calculi, as they proved to be a convenient tool to study the independent reflection principles in arithmetic and to calculate proof-theoretic ordinals of formal systems. Thus, in two different areas strictly positive languages and logics proved to combine both efficiency and simplicity, and sufficient expressive power. In this talk we discuss general problems around weak systems of this kind and describe some of their applications.


The goal of lifelong machine learning is to develop techniques that continuously and autonomously learn from data, potentially for years or decades. During this time, the system should autonomously improve its performance by extracting and preserving information between different learning tasks, similar to how a natural system learns more and more complex tasks over time. In my talk, I will highlight recent work from our research group in two directions: theoretical guarantees for lifelong learning and applications to computer vision problems.