HSE has teamed up with the University of California at San Diego (ranked 14th on the ARWU ranking, 41st on THE, and 59th on QS) to launch the new Data Structures and Algorithms specialization on Coursera. The specialization is taught completely in English and consists of five interrelated courses. Registration is open until March 7.
Education Invitation to participate short-term programmes computer science Coursera eLearning MOOCs programming
March 03, 2016

On October 18, 2015 for the first time ever, the Faculty of Computer Science at HSE will host the quarter-finals of the International Collegiate Programming Contest, ACM ICPC.
Education Invitation to participate programming
October 07, 2015 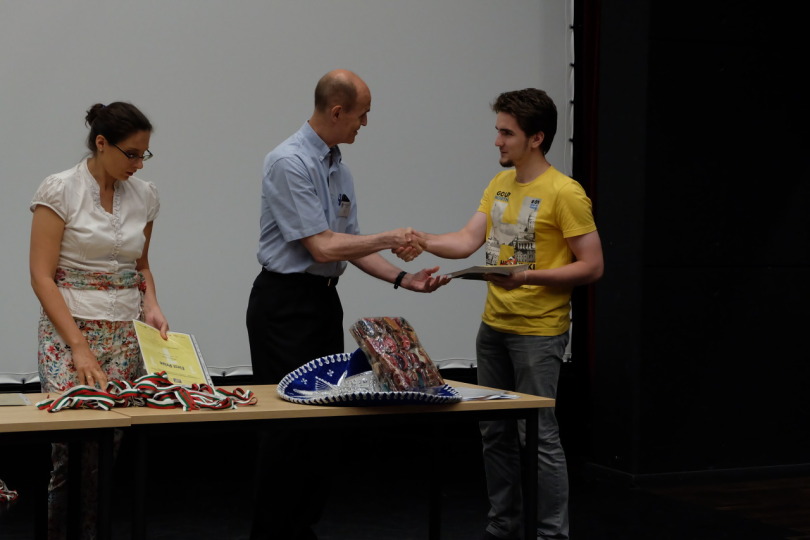 The Prestigious International Mathematics Competition for University Students took place in Bulgaria this year between 27 July and 2nd August. Competitors were given 10 problems to solve for a maximum of 10 points. HSE’s Faculty of Computer Science was represented by Vadim Kalashnikov and Gleb Posobin who are about to embark on the second year of their degree course. According to overall international ratings for students in any subject they were awarded first and third prizes respectively.
Education students Reporting an event achievements
August 05, 2015

On July 1-11 2015, a summer school on the development of mobile applications was held at HSE. Fourteen projects by school participants, created during the four days of ‘Hackaton’ were presented to an expert jury.
Education Reporting an event
July 14, 2015

Students of HSE Faculty of Computer Science Talk about their Studies

While some graduates are preparing for MA enrollment exams, others have already received confirmation from international universities. Graduates from the Faculty of Computer Science tell us about their decision to continue their studies abroad, the enrollment procedure, computer science courses available in international universities, and the role of fundamental math in studying economics.
Education alumni master's programmes study abroad
July 10, 2015

Second year Software Engineering students Vadim Drobinin and Alexander Zimin have been named the winners of the WWDC Scholarship. In June they will take part in the Apple Worldwide Developers Conference (WWDC), which is an annual international conference for Apple developers held in California 8-12 June.
Education students
May 13, 2015

Artem Stafeev, who received his bachelor's in Software Engineering in 2014, has become the first HSE representative to win a state grant to study at a foreign university as part of the new governmental programme Global Education.
Education alumni
April 01, 2015
1 2 3 4 5 6 7 8 9 10 11 12